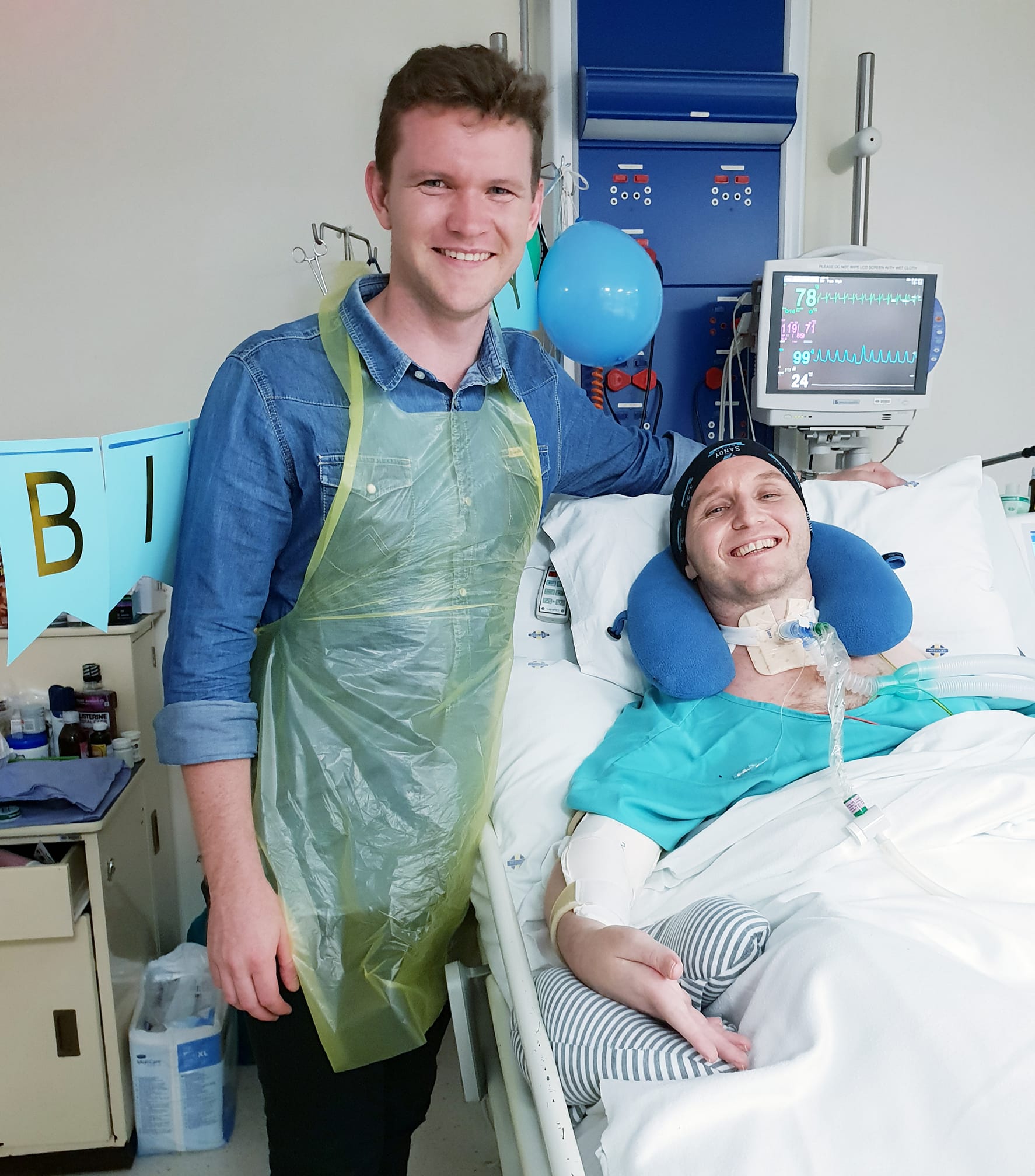 Yesterday I received a phone call from Brett Nydahl, a psychologist friend, asking if I would consider playing a few songs for one of her hospital patients on his birthday. I thought it would be a great experience, (or one that would go really badly and I could at least learn something from for next time), so I agreed.

We walked in to the ICU ward in Umhlanga Hospital, and I got to meet Kobus. Kobus was in a near-fatal road accident 16 months ago that left him severely quadriplegic, without the ability to control virtually his entire body, including his diaphragm. He has been waiting in the same ward this whole time for his medical aid, his work insurance and the road accident fund to pay out.

So I got to play some songs for Kobus, make the nurses dance (they were lots of fun, so that was really easy), and then chat to him as well.

Kobus told me that he is fully relying on God to bring him through this ordeal and into the next life, and that he was immensely grateful for how good God has been to him through his traumatic experience. I asked him if he knew about Kiara, the now-famous 13 year old miracle-girl who was in an awful car crash in December last year, nearly died and then by God’s grace was miraculously healed and had walked out of hospital just a few days earlier.

Kobus said yes, and then gestured to an adjacent ward. “That was her bed”.

I asked him what it was like to watch Kiara’s entire ordeal first-hand, and to see the miracle take place in front of him daily, as well as all the crowds of friends, family, press and international attention she and her family received. I asked if he felt like it was a little unfair of God to provide Kiara’s miracle while he was still waiting for his own, knowing that God might not even grant it to him in this life.

Kobus’ eyes welled up with tears, and he responded smiling, “Kiara was a miracle. It was amazing. I am so happy for her and her family”.

“I have been crucified with Christ. It is no longer I who live, but Christ who lives in me. And the life I now live in the flesh I live by faith in the Son of God, who loved me and gave himself for me” – Galatians 2:20

If you are a praying person, please pray for Kobus. He has finally received the pay-out he needs for his surgery, and will be operated on in the coming weeks. He asked me to ask folks to pray for his complete recovery.

[EDIT:] I had no idea that this post would be as popularly received as it was when I initially posted it on Facebook in January this year. The post was liked 3,300 times and shared 1,800 times within three days by people all over the world! Kobus’ story has certainly got out there now! I was very hesitant to post this story at first because of strong scriptural exhortations like at the beginning of Matthew 6, which reads:

“Beware of practicing your righteousness before other people in order to be seen by them, for then you will have no reward from your Father who is in heaven. “Thus, when you give to the needy, sound no trumpet before you, as the hypocrites do in the synagogues and in the streets, that they may be praised by others. Truly, I say to you, they have received their reward.  But when you give to the needy, do not let your left hand know what your right hand is doing,  so that your giving may be in secret. And your Father who sees in secret will reward you.”

However, Kobus’ testimony was so compelling and God-glorifying, that as I shared it in person with people around me and found them being reduced to tears, I could not find a way of “selflessly” keeping this story to myself. I am sad in a sense that I had to put my visit on display as I did, but greatly appreciate the impact Kobus’ story has had on so many people.