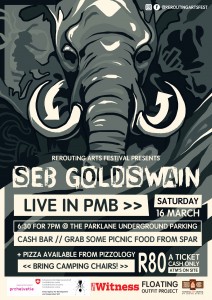 On Saturday the 16th of March 2019 Seb Goldswain will be performing at the Rerouting Arts Festival in PMB, KZN.

ReRouting Arts Festival is a site-specific multi-disciplinary arts festival that uses alternate public spaces around the city of Pietermaritzburg. It will run from March 11 to 17 and aims to create a unique audience experience, build bridges and create dialogue between different socio-economic and cultural demographics while promoting a culture of art.

The festival will be showcasing a full spectrum of visual arts, dance, music and drama performances. With exhibitions taking place at local coffee shops, and performances happening throughout the city centre it is sure to be a weekend not to be missed!

The festival will be hosting Malagasy dancer and choreographer, Julie Iarisoa, in Pietermaritzburg for the duration of the festival. Julie lives and works in Madagascar and will be giving workshops at local schools during the festival week as well as collaborating with local KZN artists for two performances, including the opening event and during March 16 live performances in the city centre at 10h00. The festival performances will also include a flash mob in Church Street choreographed by Sifiso Magesh Ngcobo and involving learners from Russell, St Nicholas and Epworth High schools.

PMB audiences will be able to watch Flatfoot Dance Company at the opening event, as well as Lorin Sookool and Sifiso Khumalo from Durban on March 16.

Locally, there is William le Cordeur’s Mahlekahlathini Theatre Company as well as Wayne Reddiar and Francis Mennigke with an exciting electroacoustic sound performance. There will be a performance from KZN musician Seb Goldswain in Parklane Centre’s Underground Parking on March 16.

“Come and explore the events and opportunities we have put together while also supporting local arts. Come and create new unique experiences and help us grow the arts in PMB,” say the organisers. “Routing Arts Festival would not be possible without the support and enthusiasm of many of our local artists and businesses and for this we are truly grateful.”

ReRouting Arts Festival is supported by an ANT Mobility Grant from Pro Helvetia Johannesburg financed by the Swiss Agency for Development and Cooperation (SDC), The Floating Outfit Project in association with the National Arts Council, the media sponsor The Witness and in association with The Tatham Art Gallery. The Festival acknowledges all their sponsors for their generous support of ReRouting Arts Festival and sharing in its vision.