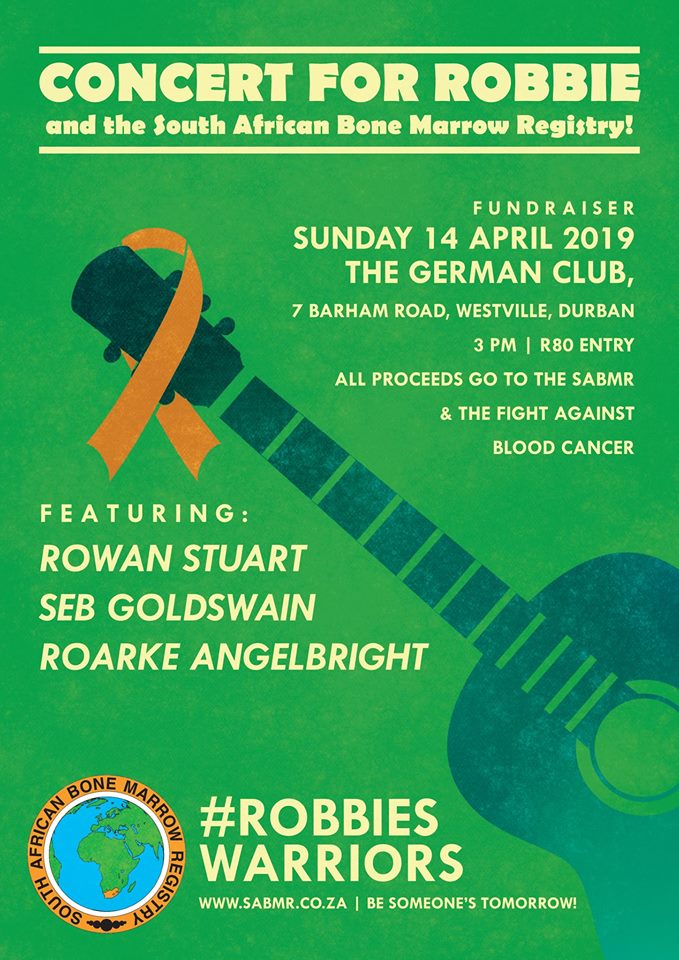 On Sunday 14 April 2019, three of Durban’s top singer-songwriters and guitarists; Rowan Stuart, Seb Goldswain and Roarke Angelbright, will unite for a special benefit concert at the German Club in Westville. The ‘Concert For Robbie’ will raise funds for Robbie Eddles and the South African Bone Marrow Registry in its fight against Leukaemia.

Robbie Eddles is a 17 year old pupil at Clifton College who has been battling Acute Lymphoblastic Leukaemia since he was 5 years old. In that time he has fought incredibly hard and beaten it twice. Sadly, this year, after nearly 5 years of remission, he has relapsed again and desperately needs a bone marrow match for a transplant. The chances of finding a match are 1: 100 000 and the South African Bone Marrow Registry only has 73 000 people on the Registry – which out of a population of nearly 60 Million South Africans is dismal. Robbie’s passion has always been growing the SABMR across all races, as there are so many South Africans waiting for a match. The test to become a Donor on the SABMR is a simple swab test and is easy, painless, quick and free of charge to applicants. However, each test costs the SABMR R2000 to purchase and process, and since they are an NPO, they are desperately in need of funds to grow the Registry. There has been a flood of applications so far in support of #RobbiesWarriors, however, the SABMR needs funds to test all the new applications.

The German Club is located at 7 Barham Road, Westville. Entrance is R80 at the gate, and children under 12 will get in free. All proceeds will go towards the South African Bone Marrow Registry, and further donations will be welcome.
Doors open at 3 pm, and the music will kick off from 3.20 pm. Food and drinks will be on sale at the venue.
For more information on the venue, contact info@musketeersdurban.co.za or to find out more about the cause, visit www.sabmr.co.za

For South African singer-songwriter Rowan Stuart, who grew up in the leafy suburbs of Durban, African rhythm was subconscious and inescapable, and manifested itself even through his earliest writing. Now with 5 albums, and multiple South African tours under his belt, Rowan has refined his signature Alternative Pop sound, and brought it to an ever-growing audience. His singles ‘Survivors’ and ‘Silver Balloon’ received widespread success across South African radio, and his latest release, ‘Fire, Water’, released in March, has already been play listed on major stations including East Coast Radio, KFM and OFM. Rowan Stuart’s captivating sound conjures thoughts of Ed Sheeran growing up in the land of the Zulu, or John Mayer being raised on Maskandi music and Johnny Clegg albums, though it retains something indefinably and distinctly intrinsic to the South African artist himself.

At the age of twenty seven, Seb Goldswain is already being considered by many of South Africa’s elite professional musicians as one of the top performing guitar players in the country. Seb is a highly versatile musician, having studied Jazz guitar and Composition up to Honours level at UKZN, and apart from performing with his own original electric band, as well as regularly working with some of SA’s top established artists, also performs his own highly energetic original solo acoustic set to wild reception. Armed with either an acoustic guitar or with an electric guitar and a Marshall stack, Sebastian has the rare ability to wow and draw crowds into a frenzy with nothing but his original music, electric stage energy and outstanding guitar playing.

Roarke Angelbright is an independent songwriter, performer and adventure-seeker. Born-and-raised in Durban, he’s a young, Alternative-Folk artist with Singer-Songwriter roots. His sound takes influences from rock, blues, folk and even hip-hop. He uses live looping to bring his solo performances to life, combining stacks of vocal layering, rhythmic acoustic guitar, singing, rapping, beatboxing and even some small guitar solos.
Roarke is an original music-focused artist and he saw the release of his debut EP, ‘Chaotic Neutral’, in late 2018. Songs from the EP have gone on to be play listed on several radio-stations throughout the country. Roarke has a follow-up EP in the pipeline, and will be heading off on his first tour outside of KZN in May.